There is much confusion around Special and General Relativity. I admit some years ago, at the beginning of my own research into what is currently better defined as fractal scaling cosmology (FSC), I was initially taken in by arguments of dissenting researchers that SRT and GRT were erroneous, because at the time there appeared to be a contradiction between my own work and SRT, but that never sat well with me. I avoided the subject of reconciling FSC with SRT and GRT in favour of bettering my own framework in FSC independently, separate from all external schools of thought, by strictly applying my S scaling factor, and associated transformation equations, to various physical phenomena and testing whether it was correct after application. Part of that research involved projecting Newtonian gravity at the quantum scale resulting in Coloumb’s charge force law (analogical to Newton’s gravity law). This was a very slow process, and it eventually evolved unavoidably into the development of a fractal material spatial medium called the fractal quantum medium (or simply QM). It was only after that development came the day that I had to reconcile SRT and GRT by necessity. What was that necessity?

What sparked this reconciliation was that after developing FSC to a specific point, I noticed that FSC core framework had an additional effect on Newtonian gravity. It was an extension on Newtonian gravity by applying FSC’s core framework to classic gravity dynamic. In applying this modification, a new gravity equation emerged that reduced to Newtonian gravity equation, was very consistent with it, but also added an additional effect. The equation was put into a gravity computer simulation test which resulted in the additional visual effect of orbital precession. Upon seeing this, I had to test the new equation with empirical data of our Sun and Mercury. What resulted was the orbital precession of Mercury precessing by 43″/century. The simulation ran 100 years of Mercury orbiting the Sun by accelerating the passage of time so the simulation took minutes not years. I ran the test many times resulting in the same value. In compound to other fascinating results in the FSC framework (deriving the elementary charge, giving the explicit cause of inertial mass), this for me solidified that FSC was indeed on the right path, or at least it was partially very correct.

Upon getting this unexpected result from a framework that appeared at first detached from General Relativity (GRT), it forced me to look more closely at General Relativity. I was most curious was how my own FSC framework and GRT resulted in the same result using mathematical frameworks that appeared fairly exclusive from each other. This bothered me, but my first step was to verify that GRT was indeed correct. This might seem arrogant to some that I needed to verify GRT was correct, but proper science demands no less. You have to question and test everything indefinitely. Ultimately I found GRT correct to a point. One such weakness in the theory is its inability to explain the spiral galaxy velocity curve without the addition of a non-verified dark matter. Another problem is its inability to integrate with quantum theory and mechanics. But given these short falls, General Relativity has proven itself empirically on several aspects.

During my studies and research in the history and mathematical framework of GRT, I realized (some time ago now) that the GRT field equation represents a physical medium with fluidic properties. It was this that initially made me very curious about physics as far back as 1992. In fact, the GRT field equation has many undeniable similarities to the “Perfect Fluid” field equation, which makes you wonder if Einstein used the “Perfect Fluid” field equation as the source for GRT’s field equation. This medium was called by Einstein the space-time continuum. The word “continuum” comes from the mathematical framework/language used by Einstein and associates to describe this medium, which is called Continuum Mechanics. Continuum Mechanics is used to describe the embodiment of dynamics of mediums such as water, concrete, and elastic jelly. The GRT field equation describes a medium that can propagate waves and is locally movable (draggable as per the Lense-Thirring effect). What was most astonishing was that GRT was not independent of older theories of a universal aether. Einstein was a big admirer of Henry Lorentz, who with others developed the Lorentz Ether Theory (LET) framework. Einstein used portions of LET in his work with Special Theory of Relativity (SRT) in 1905, but because of how SRT was devoid of an explicit aether as LET had, SRT and Einstein essentially renounced the existence of a classical aether as it was defined at the time. Later upto 1916, he developed GRT incorporating SRT. Upon revealing the GRT field equation to the scientific community, Lorentz challenged Einstein by stating that in GRT Einstein re-introduced the aether (as space-time) he previously claimed to no longer exist. Einstein replied by stating that space-time was a “new aether”. To this claim Einstein is correct. GRT’s space-time medium is not the LET aether. First it incorporates time-dilation which LET’s aether does not, and secondly is it movable while the LET aether is immovable. Either way, what is obvious is that GRT’s space-time has a geometric mathematical representation describing a medium that is physically real in some form. It also describes a medium that is essentially ambiguous from the experience of space itself, mainly due to how it bends light, which is our primary “human” means of observation. What GRT does not describe is what the space-time medium is made of. It doesn’t describe its material composition. Because of this lack of description, GRT has problems reconciling with Quantum Mechanics. This is where FSC comes in with a very explicit description of the this space-time medium, which is called the fractal quantum medium for very just cause, but this is getting beyond the current subject. GRT also lacks the description of why it appears not to impose drag on objects moving at a constant velocity, and it lacks the description of what exactly space-time curvature/distortion physically represents and how exactly curvature is caused by the introduction of a mass object. Like SRT, GRT lacks deep underlining mechanistic causes for the effects and dynamics it maps. This is where Superfluid Vacuum Theory (SVT) was introduced back in 1952 in the form of Bose-Einstein Condensate (BEC). SVT attempts to gives mechanicals causes to the what GRT embodies in the space-time medium, and in so trying, it also tries to unify GRT with Quantum Mechanics. In my opinion, it does a good job to a degree but ultimately fails. SVT embodies many older aether concepts, such as LeSage’s mechanistic gravity cause, but in a different language. SVT explicitly describes GRT as a fluidic medium with superfluid properties while giving more underlining causes, while GRT field equation describes essentially just a fluidic medium without giving underlining causes. FSC gives very explicit underlining causes for most dynamics space-time is attributed with, such as gravity. FSC breaks it down to the quantum scale. 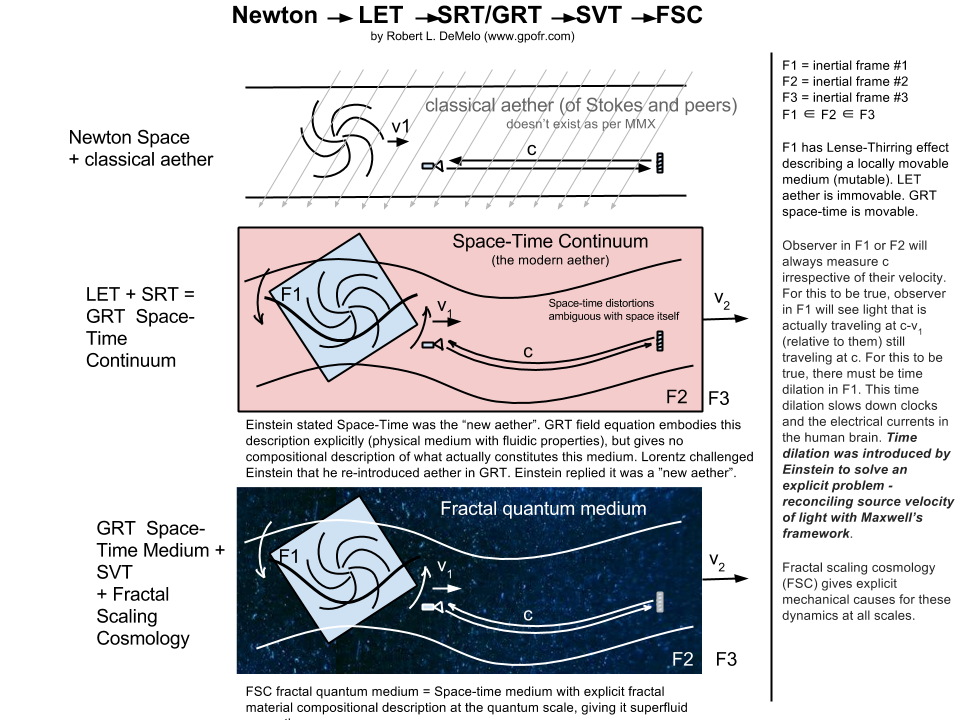 For proponents of classic LET (and I admire LET framework for its connection to GRT space-time), LET was never expressed in continuum mechanics, as far as I know, but GRT definitely was. This means that GRT space-time “aetheric” medium has a better explicit description of its physicality than LET aether ever had. LET is the more explicitly obscure aether medium between the two, therefore most prone to erroneous interpretations. Math is a very explicit language. Also GRT space-time is movable and LET ether is immovable. LET was primarily expressed as an alternative to SRT without time dilation using instead size/length contraction as a means to reconcile light source velocity with Maxwell’s framework. GRT incorporates time distortion (and length contraction) which is proven without any doubt that a gravity field affects time. How it affects time, the explicit way, maybe questioned. LET has no such description of time dilation. Time dilation was Einstein’s primary contribution.

Also c=1/sqrt(ue), where u is the vacuum permeability (or magnetic constant) and e is the vacuum permittivity, which means many scientists are fully aware that light speed is dependent on the intrinsic properties of the spatial medium (space-time continuum).

Gravity as a push effect by the spatial medium is described by GRT explicitly if you take Schwarzschild solution and apply it in 3D geometry as a pressure-density gradient producing force (gravity).

And to answer the question of if space-time is a physical medium, a fluidic solid of sorts, why doesn’t it stop physical mass objects from moving inside it? Because it has super fluidic properties. GRT expressed no frictional aspect but did express space-time “curvature” generating force. Friction/drag is also a force.