Here is a simple time dilation experiment documented in my own research work Fractal Scaling Cosmology Framework (FSC) since 2008. It’s based on space-time having an aerodynamic/hydrodynamic-like fluidic characteristic allowing for wave bow shock and tail. The bow shock region in front of a moving inertial body will have denser fractal quantum medium (space-time continuum material density), and the wave tail will be less dense. The difference between the two quantum medium densities, caused by movement compression distortion of the medium, can be used to give a potential difference between the two densities, and manifests as a dilation in time between time measurement instruments placed in the two respective density regions of a moving inertial body (in the bow shock, and in the tail). This distortion is attributed to cause and effect. The artificial propulsion of the inertial body pushes and moves the body through the quantum medium, displacing the quantum medium at the quantum scale, forming a wave bow shock and tail around the body as the medium restricts (impedes) the body’s movement when in acceleration. The denser the inertial body, the greater the distortion of the quantum medium.

To do this simple experiment:
1. get two identical digital clocks
2. get water proof enclosures and place the clocks inside them securely with adhesive
3. synchronize the clocks
4. then securely place one in front of your car’s front bumper
5. securely place the other in the back of your car’s back bumper
6. then drive around for a month, or ideally go on a lengthy road trip of 100km/h.

The denser the car’s metal construction, like cars from the 50s, the better for this experiment. Also the faster you drive, and the longer the travel, the better for the experiment. Remember that a car travel’s at extremely low velocities in comparison to the speed of light, therefore if the very small compounding effects of a car pushing and ripping through the space-time continuum fabric on the surface of the planet will take a very long time to accumulate enough very small incremental time distortions to finally be measured as an observable time deviation…time dilation. The numerous acceleration phases of the car will also have a compounding effect.

To understand how small an impact a car will have generating time dilation by moving at conventional road speeds and accelerations, let’s take a very appropriate analogy of water representing the quantum medium (space-time continuum). At 20C, the speed of sound in water is c_w = 1482 [m/s]. If we were to equate c_w to the speed of light c in a vacuum, then traveling at 100 [km/h] in a vacuum would be equal in ratio to traveling through water at 0.0001372 [m/s] or 0.000494 [km/h]. It is very easy to see that traveling at 0.000494 [km/h] in water would hardly produce any compression density distortion in the water forming a bow shock and tail regions (no matter how slight), because the area around the moving inertial mass would be filled in by the water faster than the object is actually moving. The medium is “malleably” faster than the moving object. This gives Einstein’s SRT a far easier depiction to understand what’s happening. But even given this, there is still a very slight compression distortion as an inertial body pushes through the medium that would accumulate by synchronized digital time measurement devices over time, at least in theory.

If time dilation is true, the two clocks will deviate after the experimental run.

To give the dilation an average distortion factor for the experiment:

To prove time dilation, D has to be non-zero (D < 0 < D). The formulation of D in relation to acceleration and velocity is part of my research work in Fractal Scaling Cosmology (FSC). The unit used for D is arbitrary since dimension is canceled in ratio of the same fundamental dimension, but one is given [melo] to describe this factor as a distortion potential value due to an inertial object’s movement. 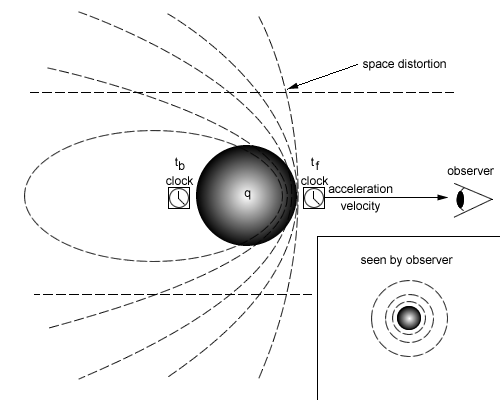 This experiment is simple and works on the extended hypothesis that the space-time continuum has aerodynamic fluidic properties that affect the passage of time, and subsequently the measurement of distance.

Additionally several configurations (ex. controlled lab, better environmental shielding) and testing cycles can be done (ex. flipping the clocks in different test runs to rule out mechanical issues). More configurations of this experiment can be invented applying the same simplicity.

Another experimental configuration is using a lead block attached to a centrifuge  armature mechanism with one clock in front of the block, and another synced clock on the back of the block.

What my experiment attempts to measure is a difference factor in dilation between two seemly equal frames where one is shielded in the direction of movement by a fairly dense inertial body, and the other is far less shielded.

And to prove time dilation, this factor has to be D < 0 < D. A non-zero value proves time dilation exists. Giving D a scale proportional to acceleration and velocity is what my own research work involves.

Additionally, the use of digital clocks is to mimic the human brain, because these clocks use electrical currents composed of electrons (quantum particles) to transmit signals, just like in a human brain. Therefore the space-time environmental affect on these clocks would also affect human neurological processes, and microscopic human biological body functions near the quantum scale, in the same way…all of it affecting the perceived passage of time.

To clarify, and right out my own work, if the quantum medium’s material density were to increase, movement of quantum particles would be further restricted, would be slowed down, and their inertial mass would increase also (…relatively), and that goes for electrons in the clocks in my experiment, as well as for electrons in the human body and brain.

Which leads to the philosophical question of what time is exactly?? You see, when searching for fundamental answers, and finding them, at least believing to have found them, the mystery is gone, as in the mystery of time. What I’ve essentially described here is the demystification of time itself by giving time dilation a fundamentally mechanical explanation, the manipulation of restricting or loosing the execution of sequential events. In this case it’s the restriction of quantum particle movement, which affects macroscopic constructs made from quantum particles.

The mystery of time dilation is not mutually exclusive from the existential environmental quantum effects (via the “fractal” quantum medium), in the exact same way electronic clocks are affected by external environmental factors (in a vacuum).